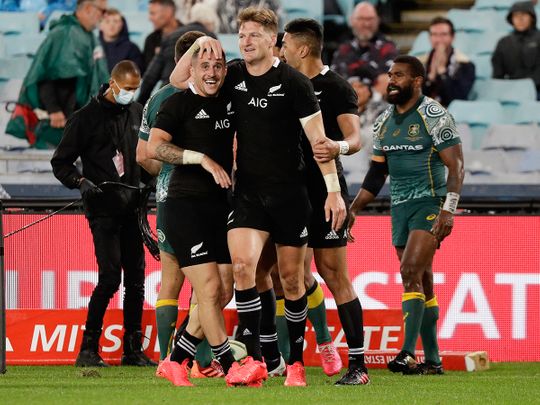 Brisbane: With the Bledisloe Cup secure for the 18th straight year, New Zealand made seven personnel and one positional change to their starting line-up for Saturday’s Tri-Nations Test against Australia at Brisbane.

Back-rower Akira Ioane will make his Test debut on the blindside flank while hooker Asafo Aumua, back-rower Cullen Grace and utility back Will Jordan are set for debuts from the bench.

The All Blacks beat the Wallabies 43-5 last weekend to take an unbeatable 2-1 lead in the four-test Bledisloe Cup series, ensuring Australia continues a Trans-Tasman drought which stretches back to 2003. The match also gave New Zealand a winning start to the Tri-Nations involving Australia and Argentina.

Beauden Barrett will start at fly-half for the first time this season, moving from full-back to take over from Richie Mo’unga in a reshaped All Blacks backline. Powerhouse Ngani Laumape is at inside centre and will combine in midfield with Anton Lienert-Brown.

Rieko Ioane will play on the left wing, likely ending the experiment of turning him into a centre this season. Sevu Reece will start on the right wing, pushing Jordie Barrett back to his preferred position of fullback. TJ Perenara takes over from Aaron Smith at scrum-half.

Among the forwards, Codie Taylor has been promoted from the bench to start at hooker, and lock Scott Barrett similarly moves from the reserves to the starting line-up, joining is Crusaders partner Sam Whitelock. Scott Barrett’s elevation means the three Barrett brothers are all in the starting XV.

“We’ve been really delighted with the whole squad so we feel that there are some players who are really putting their hand up and deserve an opportunity,” coach Ian Foster said.

“Secondly, it’s been a big three-week Test series to date against Australia. It’ll be another massive Test so we’ve brought in some freshness and new energy into the group. Players are jumping out of their skins to get onto the park.”

Wallabies coach Dave Rennie also sprang surprises, selecting Reece Hodge at fly-half and two more players to make their Test debuts. Hodge takes over from Noah Lolesio, who had a difficult Test debut in last weekend’s loss in Sydney when he took over from the injured James O’Connor.

O’Connor will again sit out the match because of a knee injury.

Hunter Paisami takes over at inside centre from Irae Simone, who also made his test debut in Sydney.

Tom Banks returns at fullback in place of Dane Haylett-Perry, and his ACT Brumbies teammate Tom Wright will make his debut on the right wing, replacing Filipo Daugunu.

Lock Rob Simmons, who made a strong impact from the bench in Sydney, joins the starting line-up in place of the injured Lukhan Salakaia-Loto. Lachie Swinton will make his debut on the blindside flank in the only other change to the forward pack.

Prop James Slipper on Saturday will become the 13th Australian to play 100 tests.

“It’s going to be a really special night for James in front of his family and friends back at his home ground and I know the team will be doing everything they can to make sure it’s a memorable result,” Rennie said.

“Lachlan, Tom and Angus have been excellent over the past seven weeks and have earned their first jersey for Australia.

“As a whole group we were really disappointed after last weekend, and we get a chance to show our character on Saturday in Brisbane.”

Previous articleRecovered Dominic Thiem starts preparations for ATP Finals
Next articleMums, motors and miming: The week of sport in quotes