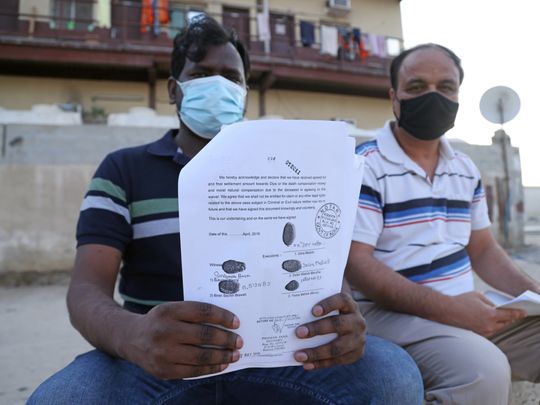 Dubai: Two Indian expatriates — a safety officer and a civil engineer — have appealed for mercy or help to pay Dh200,000 in diya (blood money) to the family of a worker who died after an accidental fall at a Dubai worksite in 2017.

Shaney Haider, 45, from Uttar Pradesh and B. Bharathiraja, 33, from Tamil Nadu, said the incident took place on January 22 in 2017. Despite getting a pardon from the family of the deceased, Utpal Mallick from West Bengal, following an out-of-court settlement, the duo could still not get the pardon legally validated, the duo told Gulf News.

Mallick, then 42, had fallen while constructing the terrace of a two-storey villa in Dubai, said Haider. “Just a few days earlier, the construction above one floor had been given a clean chit. Mallick fell from a height of about six metres to a height of three metres, but unfortunately he fell on the scaffolding rods and was severely injured. That is what led to his death,” he claimed.

Haider said he was the only safety officer working for the company that had construction work going on at nine different locations at the same time. “After my company owner informed me about the accident, I rushed to the site of the villa where it happened. I also called Raja, who was at work in another site, to accompany me as the engineer at the accident site was on leave. However, Mallick had passed away before we could reach the site.”

Subsequently, Haider and Bharathiraja were jailed, but later released on bail, the duo said. Haider said he was a Trakhees-approved safety officer, who had been working in Dubai since 2004.

Why they can’t pay blood money

“The company for which we worked was already in trouble when the unfortunate incident took place. I was not paid my salaries for about 15 months. Later, I won the labour case that I had filed and the court ordered the company to pay me the pending salary of Dh100,000. If I had got that money I could have given it to Mallick’s family,” said Haider,

Bharathiraja, who was raised by his brothers as he lost his parents at a young age, said the duo could have paid from their salaries or taken a loan to make the ‘diya’ payment had they still been employed. However, their company was shut down, the duo claimed.

Haider, who has three young children, aged and ailing parents and two siblings who are people of determination, said his family had been struggling without any financial support from him. Bharathiraja said he had come to Dubai by the end of 2014 and had never gone home thereafter.

“I came with the hope to support my elder brother who had provided for my education. I thought I would be able to help him educate his children and make them engineers like me. I never imagined my fate would have a twist like this,” said Bharathiraja.

Both of them have been living with the help of some of their former colleagues and Bharathiraja’s friends from Tamil Nadu. The duo said they had contacted the Indian Consulate in Dubai, seeking support. The consulate said it was aware of their plight, but could not offer aid from the Indian Community Welfare Fund since the matter was out of the scope of the fund.

“We don’t blame anyone. We are just seeking help to be pardoned or to be able to make the full payment of the ‘diya’ money to Mallick’s family. This country has supported my family since 2004. We wish to continue working here after clearing our names in this case. We appeal for mercy and support,” said Haider.

The duo said they had contacted the family of Mallick and made an out-of-court settlement with support from their friends. They managed to get an affidavit undertaking from the mother, wife and daughter of Mallick, acknowledging that they were the sole legal heirs of the deceased.

However, Haider said their plea for pardon could not be accepted by the court since one of the family members of the deceased — Mallick’s seven-year-old daughter — was still a minor and her pardon as an adult was required by the court to accept the plea for mercy.

“In such cases, the family members of the deceased are required to secure a legal heirship certificate from the government entity concerned in their native place. Their self-affidavit is not valid. If the children are minors and if the mother is still alive, they should also mention that the mother is the guardian of the children. Or else it is better for the mother to get a guardianship certificate from the local court to validate that point.”

Previous articleOman to give a 10-day free visa entry to 103 countries
Next articleIn pictures: The moment SpaceX’s Starship prototype exploded on landing after test launch