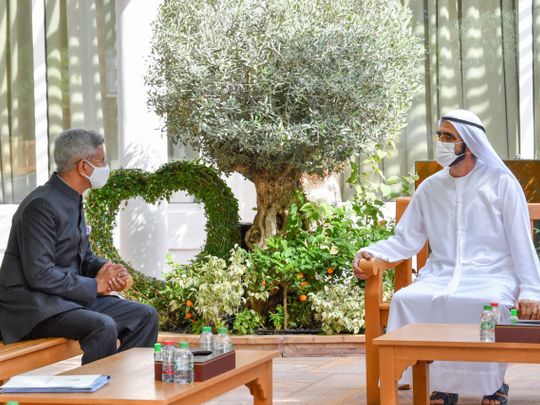 In the letter, Modi thanked Sheikh Mohammed and the UAE government for the attention and follow-up given by the competent health authorities in the country to the Covid-19 “and its efforts to protect society and limit the spread of this epidemic and apply the necessary measures that contribute to limiting the spread of disease”.

The letter was presented to Sheikh Mohammed by India’s foreign minister, Dr. Subramaniam Jaishankar, who is currently visiting the country. Sheikh Mohammed and the minister exchanged views on ways to restore and advance the economies of the UAE and India and revive movement and trade exchange between the two countries.

Sheikh Mohammed confirmed during the meeting that the UAE is keen to combat the pandemic and limit its negative effects on most sectors, especially tourism, trade, economic, health and others, and to gradually return to a normal life.

In addition, Jaishankar praised all the measures taken in the country to confront the coronavirus, which made the UAE at the forefront of countries that were able to harness all its material, human and medical capabilities in order to help many countries that need assistance to help prevent the pandemic.

It was also attended by Pavan Kapoor, Ambassador India to the UAE, and Aman Puri, Indian Consul General in Dubai.

Diplomatic sources Gulf News that the minister, who had wrapped up a two-day official visit to the UAE on Thursday, made a stopover in Dubai again on Sunday during his way back from Seychelles to India.

Apart from meeting with Sheikh Mohammed, the minister interacted virtually with the Indian community leaders in Dubai and Northern Emirates. In his address to the community, the minister expressed his appreciation for their support to fellow Indians during the COVID-19 pandemic, the Indian Consulate in Dubai said in a tweet.

The minister also visited the India pavilion at Dubai Expo 2020 site. He was briefed by the Indian Ambassador to the UAE Pavan Kapoor and Consul General of India in Dubai Dr Aman Puri.

“The minister reviewed the progress of the India pavilion which promises to showcase our strength in innovation and technology in addition to arts and culture,” the consulate said in another Tweet.