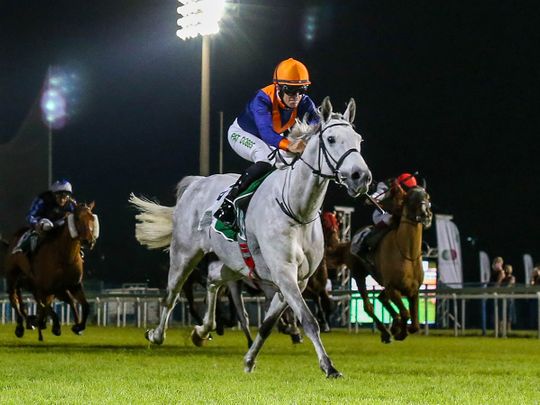 Dubai: When Belgian trainer Timo Keersmaeker’s kids, excited at the thought of an Arabian horse joining their dad’s stable, decided to name him after the world famous football, Lionel Messi, little did they know that it was only the start of what has become an amazing journey.

On a truly wonderful night’s racing at the Abu Dhabi Equestrian Club, the Messi of flat-racing scored the biggest victory of his career when eclipsing a world-class field to win the Dh5 million Group 1 Sheikh Zayed bin Sultan Al Nahyan Jewel Crown.

Bred and owned by Keersmaeker, the eight-year-old son of Dahees who was making the 24th start of a star-studded career proved the might of European breeding with a thundering performance that saw him cross the finish three-and-a-half lengths clear of Al Zahir, ridden by Dane O’Neill for Emirati handler Ali Rashid Al Rayhi with Antonio Fresh and Hayyan battling to take third in the contest which was run for the first time in its 12-year history over 2,200 metres.

“This is a dream come true,” said Keersmaekers. “You always think that one day you can come to Abu Dhabi and compete in races like this and then they come true. I’m really happy for team who helped me achieve this great win. It’s been a great year.”

Pat Dobbs, a leading Dubai-based jockey who was aboard the winner said: “He jumped super nice and we got into a nice position. This is the best (Arabian) race in the world and it’s great to win it.”

Somoud, who led the local challenge, went into the race on a four-win streak, but could only finish 12 of the 16 runners from Europe, USA and the Middle East.

Ridden by first-season jockey Ryan Curatolo, who appears to have struck up a fine rapport with Bachalard, notwithstanding the fact that they’re both Frenchmen, the son of Sea The Stars cut through a gap between Medahim (Richard Mullen) and Mailshot (Royston Ffrench) in the final strides of the 1,600 metre contest to score by a short head.

It was the second successive success for the combination on the Abu Dhabi turf following a victory in the conditions event on November 15.

“I’m very pleased for the trainer and the team, they did a very good job with the horse” said Curatolo. “He’s been training very well in the morning. There’s a lot of people working very hard at Jebel Ali every day and they deserve the credit for this more than me. I have the easy part, I just sit on the horse for two minutes, and just have fun.”

The Purebred Arabian of the Sheikh Zayed bin Sultan Al Nahyan National Day Cup was won in emphatic fashion by Of Alwajel who is bred and owned by Khalid Khalifa Al Naboodah, the leading breeder in the UAE.

Eight time UAE champion jockey Tadhg O’Shea did the steering aboard the five-year-old son of Of Al Buraq letting the horse dictate proceedings which he did with panache, bolting clear halfway down the home straight to pull away for a three-and-a-quarter-length victory over Sharaf Al Reef, ridden by Conor Beasley.

“This horse is very special and Ernst Oertel is the best Purebred Arabian trainer in the world,” said O’Shea. “He made it look so easy.”