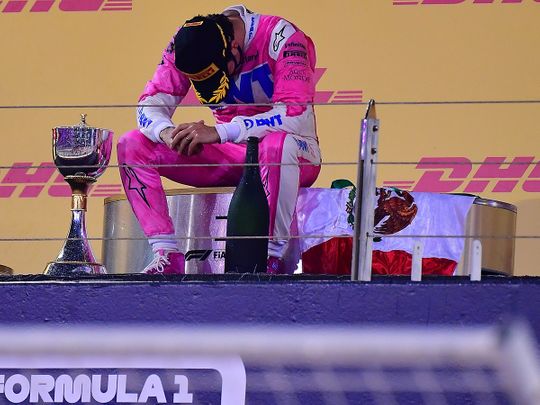 Dubai: Chaos reigned as Sergio Perez was the eventual winner of the Sakhir Grand Prix in Bahrain. The Racing Point driver — without a seat in Formula One next season — claimed victory amid one of the most dramatic races on the smallest circuit this campaign.

Young George Russell — the Williams rookie who was standing in for COVID-19-stricken world champion Lewis Hamilton — suffered a series of terrible calls by the Mercedes team as he was on the brink of his first ever F1 points, let alone a GP victory.

As if 2020 had not delivered enough in a season that was at risk of not happening at all, it served up an absolute classic in the second of the back-to-back races in Bahrain.

Russell’s last-minute call-up from Williams to step in for the stricken Hamilton had already lit up the practice and qualifying sessions as he outpaced his seasoned new teammate Valtteri Bottas on Friday and then qualified second ahead of two of the world’s most promising drivers — Max Verstappen in the Red Bull and Charles Leclerc in his Ferrari.

He was nailed on for victory after taking the lead from Bottas on Lap 1 as Leclerc took out Verstappen in a dramatic opening lap. Tradgedy struck as the race neared its ending as Mercedes threw a spanner in the works with a ludicrous error, mixing up Russell’s and Bottas’ hard and soft tyres during a needless safety-car pit-stop with the Silver Arrows cruising to victory.

The chaos that ensued — with Russell wearing different coloured and illegal tyres — meant he had to pit again and the lead was lost.

Astoundingly, the young Briton looked very much the man to step into Hamilton’s shoes as he once again got ahead of Bottas and was chasing down race leader Perez when he suffered a puncture.

Such is his tenacity, he got out there and finished ninth for his first points in F1 as Perez edged Esteban Ocon and Lance Stroll on the podium. Bottas finished down in eight as he also suffered from a terrible Mercedes management job.

“I am speechless,” said a tearful Perez after his first GP win. “I hope I am not dreaming because I dream for so many years being in this moment. Ten years it took me. I don’t know what to say. After the first lap race it was gone. It was all about not giving up.”

While his future is still up in the air as Racing Point change their line-up next season, Perez added: “It [the win] gives me a bit more peace with myself. What happens is not so much in my hands. I want to keep going. If I am not on the grid next year I will be back in 2022.”

An emotion Russell said: “I can’t really put it into words at the minute. It wasn’t a nice feeling. I have had races where victory was taken away but twice … I just couldn’t believe it. I gave it everything I had. I was managing the race at the start and felt confident and comfortable. We had the muddle up and put us on the back foot. I think I could have still caught Sergio. Gutted but incredibly proud and happy to have had the opportunity.”