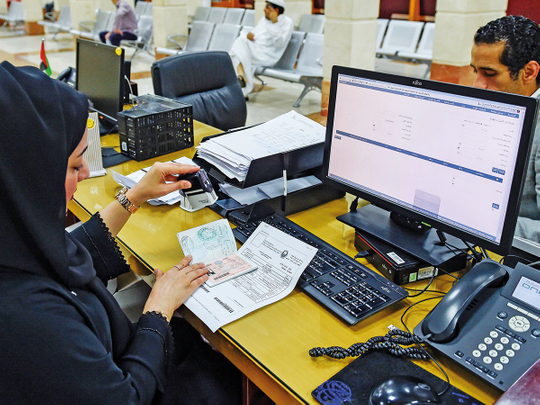 Dubai: Residents who hire an absconding worker or violator of residency rules can now get a second chance and avoid the Dh50,000 fine if they move to change the status of the worker, a senior prosecutor in Dubai has said.

Advocate-General Dr Ali Humaid Bin Khatim, chief of naturalisation and residency prosecution in Dubai, said that Dubai’s Attorney General has directed the concerned departments to go easy on people who may have hired a visa violator and dismiss the case if he or she changes the status of the violator and puts him or her under his sponsorship.

“We strictly implement the law for people who hire a violator of residency laws or work for a different sponsor, but if the person uses a violator and changes his or her status, then case will be dismissed as per orders from the attorney-general,” Dr Bin Khatim said during a virtual session to raise awareness about residency law violators, organised by the General Directorate of Residency and Foreigners Affairs in Dubai (GDRFA Dubai) in Dubai on Wednesday.

As per UAE law, if an employer is caught hiring a a visa violator, or does not report an absconding worker, he is liable to pay a Dh50,000 fine, followed by deportation for the violator.

“Case can be dismissed in coordination with GDRFA and other government bodies if the employer changes the status of the violator. It is in line with the country’s principles of tolerance and willingness to give a second chance to the employer to stay on in the country,” Dr Bin Khatim added.

He said the punishment could go up to Dh100,000 and two months imprisonment if the employer hires an infiltrator.

If the employer hires someone on visit or tourist visa is also liable for a Dh50,000 fine while the worker is deported.

“The harsh punishments in the updated laws will help have a country without violators,” Dr Bin Khatim said.

He said the updated law added new penalities in 2017 for anyone who brings a person on visit visa and lets him work without changing the status.

“Some companies or individuals bring in people with entry permits to the UAE and let them work in a company despite coming in on a visit or tourist visa. People call them ‘visa dealers’ and they can be punished with fines and imprisonment.”

Dr Bin Khatim, urged people not to hire absconding workers, people with other sponsors or holders of visit and tourist visas to avoid legal action.

Mohsen Al Nesy, acting assistant undersecretary for inspection affairs at the Ministry of Human Resources and Emiratisation, said during the session workers who have any problems with their sponsors or refuse to renew their residency can contact the ministry.

“Our call centre 80060 is available round the clock. We can send inspectors to the work site or the company to identify the problem and solve it,” Al Nesy added.