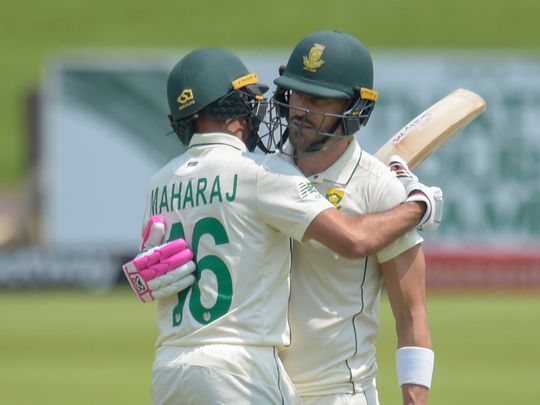 Centurion: Faf du Plessis made a career-best 177 not out in his first Test since giving up the captaincy to take South Africa into a big 169-run lead over a Sri Lanka team stricken by injuries in the series opener on Monday.

Du Plessis powered South Africa to 565-6 at tea on Day 3 and he wasn’t done yet as Sri Lanka’s depleted bowling attack toiled amid a horrendous run of luck. Sri Lanka had four bowlers nursing injuries and three of them were off the field.

South Africa’s first-innings lead now looked like a match-winning one with plenty of time left in the first of two Tests. Sri Lanka had scored 396 in its first innings, its best Test total in South Africa, but the game swung South Africa’s way dramatically with du Plessis’ big hundred and Sri Lanka’s personnel problems.

Off spinner Dhananjaya de Silva was injured while batting on the first day, pace bowler Kasun Rajitha managed just 13 deliveries before limping off on the second day, and fellow frontline quick bowler Lahiru Kumara and legspinner Wanindu Hasaranga hurt themselves on Monday.

Hasaranga was the only one who returned to the field to bowl again, but he wasn’t completely comfortable.

It forced Sri Lanka to use batsmen Kusal Mendis and captain Dimuth Karunaratne as bowlers.

Freed from the pressure of being captain, du Plessis made his first test hundred in two years and 10th of his career, and turned the game around completely for the Proteas after they wobbled at 220-4 at one stage on the second day.

The 36-year-old du Plessis struck 23 fours and had celebrated three figures by raising both arms in the air and unleashing a beaming smile in the direction of his teammates sitting outside the dressing room. He was on course for his first double hundred.

Du Plessis anchored three big partnerships. First, he was aided by Temba Bavuma, who made 71 in the pair’s stand of 179. Du Plessis and Wiaan Mulder (36) put on another 77 and du Plessis and Keshav Maharaj (43 not out) were still going in an unbroken stand of 89 by the tea break.

South Africa began the day on 317-4 but surged ahead in the morning session with du Plessis and Bavuma in charge.

Bavuma was the only wicket of that first session for Sri Lanka, and maybe he shouldn’t have been _ Bavuma walked off after an appeal for caught behind but TV replays seemed to show he never hit the ball.

Dasun Shanaka was Sri Lanka’s most impressive player after making 66 not out with the bat and then taking on added bowling responsibilities because of the injury problems. He had 2-92 and Hasaranga had 2-143.