Rasd qatar Bringing you the latest news, opinions, headline, stories, trends & more in the country. Browse the site for up to date information on national, regional and world wide happenings from politics, business, economy, finance, sports, movies, lifestyle, travel, events, food and a lot more
Home GULF NEWS LATEST When do I get a COVID-19 vaccine? 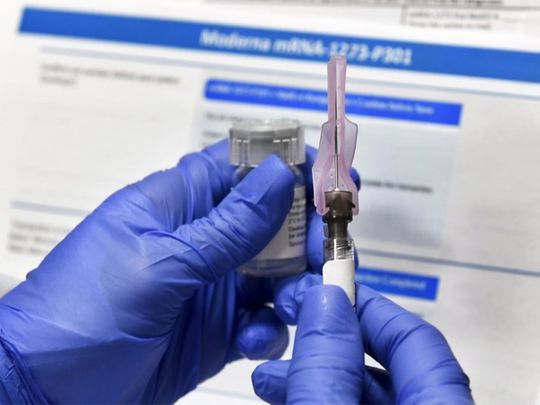 DUBAI: There are typically 4 phases in a vaccine trial. The first 3 are the most crucial. That, in theory, is the journey to be taken by all the vaccines against COVID-19. Here, we focus on the journey of Moderna’s mRNA-1273 shot.

First the good news: The clinical trials drew an immense amount of altruism. Tens of thousands of volunteers offered their bodies to test the unproven, though promising, jabs. In July 2020, at the end of Phases 1 and 2, it already involved hundreds of volunteers. On Monday (November 16, 2020), Moderna’s announcement stunned the world: a 94.5% vaccine efficacy, based on interim data, is as good as can be.

In terms of the data science, the Phase 3 trials followed standard protocol involving 30,000 volunteers. The trial and analysis aren’t complete yet, but initial results take the mRNA shot closer to approval. If so, it would be the first use in humans of this revolutionary new therapy, altogether disrupting more than 200 years of vaccine-making process, thanks to advances in genetic sequencing.

They journey took a much shorter route, instead of 4 to 16 years typical for traditional vaccines. Modern is the epitome of high-speed vaccine development. On May 12, 2020, following animal trials, it received fast-track approval for human trials, from the US Food and Drug Administration (FDA). Phase 1 involved 45 volunteers. A few days later, on May 29, the first volunteer under Phase 2 was dosed, this time with up to 600 participants — including adults below and above age 55.

It ran for two months. Then on July 27, 2020, Phase-3 kicked off. The first “interim analysis” came on November 16, 2020, which showed “94.5% efficacy”. All told, the trials took about six months. Now, given the unprecedented challenge and the extraordinary global response, two dozen other vaccine candidates are close to the finish line.

Moderna, working under the supervision of FDA regulators, stated that out of 95 volunteers infected by COVID-19, 90 were given placebo shots. The 5 who were given the experimental nMRA-1273 shot only had mild or moderate symptoms of the viral disease. And of the 11 volunteers who suffered severe COVID-19 cases, all 11 were from the placebo group.

Why is this significant?

First, because there’s a massive number of COVID-19 cases in the US, and lockdowns implemented in other countries due to spike in cases. A research like this can only work in a geographical area where there’s plenty for cases being naturally transmitted in the community. Add to this the good mix of enthicities in America.

Second, it’s a “double-blind” study. That means neither the vaccine volunteers nor the vaccine administrators knew whether the experimental shot (with the active substance) or a placebo (sugar or saline solution) was given. The two shots were made to look identical. 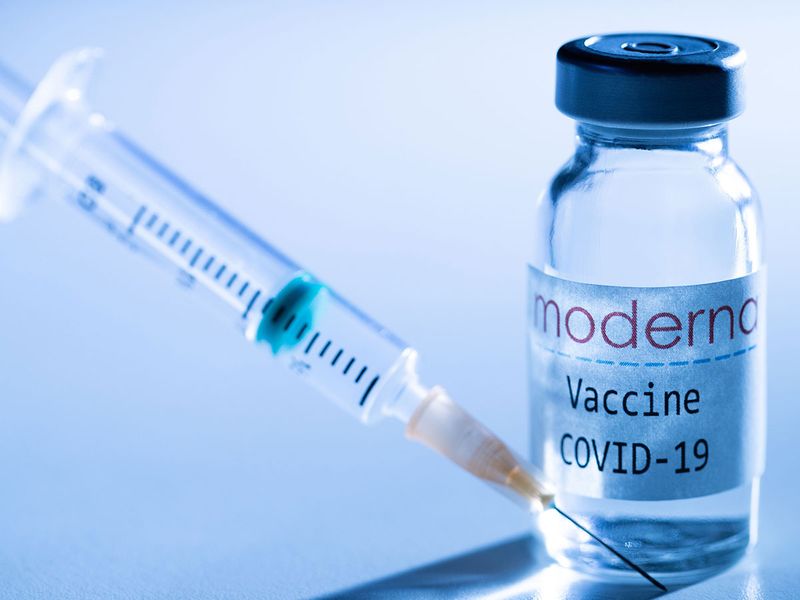 This illustration picture taken in a studio in Paris on November 16, 2020, shows a syringe and a vial with the logo of US biotech firm Moderna.
Image Credit: AFP

Third, the assignment of volunteers to either the active vaccine or a placebo was totally randomised. There was no particular sequence, or algorithm used in assigning the shots. Finally, the recruitment of 30,000 volunteers — from different classes, ethnicities and communiteis — means the results will be statistically significant. This is the so-called “gold standard” of clinical research on new vaccines and drugs.

An independent board of experts supervised by the FDA checked the data on the first 95 participants who were infected with COVID-19. The result: 90 of the initial 95 volunteers who were infected with COVID-19 received the placebo. Only 5 had been given the experimental mRNA-1273 vaccine. Based on that data, the board estimated that the vaccine is 94.5 per cent effective. 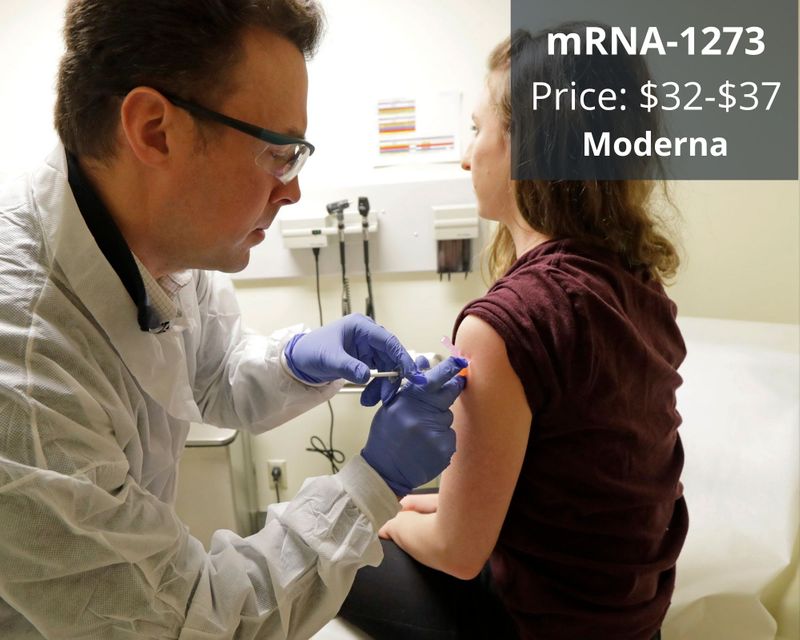 What does it prove?

It suggests that mRNA vaccine, the platform used by both Moderna and Prizer (also by Germany’s CureVac), can help the world break free from COVID’s grip. A whole generation of scientists had been working on mRNA therapies — testing it to treat everything from tumors to degenerative diseases. If and when the mRNA shots are approved, it would be the first time mRNA technology would be allowed for use in humans, and that too, on a massive scale. But more than this, it represents a revolution in vaccine development.

Efficacy vs effectiveness: What’s the difference?

Efficacy is defined as the performance of an intervention under ideal and controlled circumstances. On the other hand, effectiveness refers to its performance under “real-world” conditions. The medical journal CTG explains that the distinction between the two types of trial is a “continuum” rather than a strict dichotomy, as it is “impossible to perform a pure efficacy study or pure effectiveness study”.

Why is it revolutionary?

For 224 years (from 1796) from the time British doctor Edward Jenner first used a real virus to treat smallpox, vaccines always involved the use of a real virus — in one form or another (live “attenuated, “killed” inactivated, sub-unit, recombinant, conjugate, etc). mRNA does away with that.

Traditionally, vaccines take time to develop, typically 16 years (fastest was four years). mRNA speeds up this process. In effect, it turns vaccine development into software programming, using DNA sequencing to enhance the human body’s own machinery to do exactly what the body does once infected.

With mRNA, scientists make use of supe computers to conduct what amounts to genetic engineering — the manipulation of cells at the genetic level. mRNA is seen as the advanced biopharma industry’s answer to a whole new class of pathogens — or infectious agents — for which no specific vaccines exist yet. Going forward, experts like Dr Ugur Sahin, 55, inventor of Pfizer’s mRNA vaccine, believe could the mRNA technology can be used to speed up vaccine trials against other infectious diseases in the future.

HOW IT WORKS
The mRNA vaccine platform is unlike any other vaccine out today. Instead of live or killed virus, both the mRNA-1273 and BNT162b2 contain a genetic molecule called messenger RNA.

While administered like other vaccines — via an intramuscular injection — an anti-viral messenger RNA uses synthentic genes. The shot, wrapped in an oily bubble, injects synthetic genes “programmed” to use the human body’s own proteins to generate “fake” viruses similar to specific components of a target pathogen (like the “spike” exo-protein of the SARS-CoV-2) — which then trigger a response from our own immune system.

The bubble can fuse to a muscle cell and deliver the RNA. That molecule is coded with instructions for building a coronavirus spike protein. When a vaccinated cell releases copies of the spike protein, the immune system learns to make antibodies against it.

When do I get the vaccine?

There are no hard and fast answers. But now, more than ever, an answer looks within reach. But first, the trials (there are 24 vaccines now in Phase 3) need to be completed, as more data from large studies must be gathered to validate the remarkable interim results. Second, the vaccine makers must apply for emergency-use authorisation and convince health regulators about their safety and effectiveness. There’s a lot more work to be done. Moves are afoot to tackle distribution challenges, too. Airlines and logistics companies will surely be involved in this massive global exercise.

On Tuesday (November 17, 2020), Pfizer announced the launch of a “pilot delivery programme” for its BNT162b2 vaccine in 4 US states. The move is aimed to prove distribution routes, the firm said. Events leading to the approval and distribution are sure to draw global attention.

events leading to approval and distribution are sure to draw global attention. Following approval, the vaccines must be mass produced. Some vaccine candidates, bankrolled by different governments, had already been mass manufactured ahead of post-Phase 3 certification. This could help accelerate the process from the lab, to production, to your arm. And so it’s quite possible that the world could potentially have multiple successful vaccines in multiple places.

LOGISTICS: ULTRA-COLD STORAGE, SHIPPING
Pfizer’s BNT162b2 vaccine needd ultra-freezing: it must be shipped and stored at -70 degrees Celsius (-94°F), significantly below the standard for vaccines of two-to-eight degrees Celsius (36-46°F).

Moderna Inc said its experimental vaccine does not require ultracold freezing, a factor that could prove to be major advantage over Pfizer’s product.