UAE National Day 2020: Filipina in Dubai who fought against cancer twice celebrates with a creative gesture 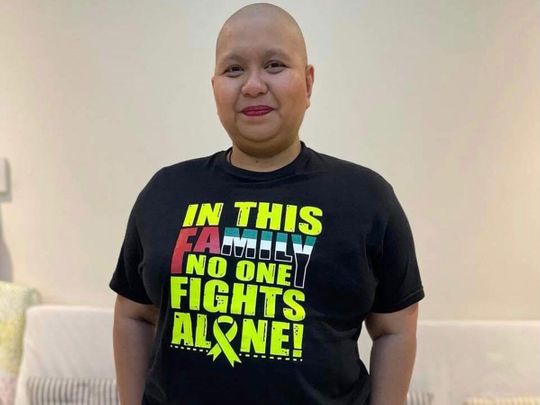 Dubai: A brave young Filipino expatriate, who has had cancer revisiting her a second time this year, has launched a special initiative of designing T-shirts to mark the UAE National Day in an expression of solidarity with all cancer survivors.

Maria France Vizcaya, 42 has created different designs with the UAE national flag colours of red, white, green and black, emblazoned with the slogan ‘No one fights alone’, in order to express support for cancer survivors and create awareness in the community. Each T-shirt is priced Dh88 and the sum collected from the sale will be pledged to support cancer patients in need.

Vizcaya, a sales and retail personnel at a private organisation, is a single mother of four children who live in the Philippines. She said: “I am more than grateful to the UAE as despite being alone here without family, the friends I have made here are more than my family — given the way they stood by me in my fight against cancer.”

Overwhelmed with help and support

Vizcaya was diagnosed by chance in 2018, during a lunch break at a shopping mall. “There was a Pink caravan screening ongoing on our floor and as I walked across for lunch, a volunteer begged me to go through the screening. Quite by chance, the doctors discovered the lump, which was later diagnosed by the oncologists at the University Hospital of Sharjah (UHS) as an aggressive Stage Two breast cancer. I am thankful to that volunteer who insisted and convinced me to take some time off my lunch hour and undergo the screening,” she said. Later, Vizcaya underwent a detailed screening and found out that she had the BRCA 1 gene.

However, these findings did not deter Vizcaya who made friends at the hospital. In addition, other volunteers from the Pink Caravan extended their support to her, throughout her ordeal last year when she not only underwent a radical mastectomy of her left breast, but also went through several cycles of chemotherapy.

“I was so relieved to be in remission by mid-2019. Since then, I have been very vocal at all cancer awareness campaigns, sharing my story, urging women to muster courage and undergo screening for early detection.”

During one of her routine monthly examinations in April 2020, the UHS oncologists discovered four malignant pulmonary nodules in her lungs. Once again, an extended family of friends and volunteers rallied around her, supporting her through her chemotherapy and standing by her through the oral chemo.

Despite the ordeals, Vizcaya has always managed to be positive and inspired to continue her fight. “I would not have been able to put up a spirited fight if I had not had such wonderful people around me to support me. My friends drove me to the hospital for chemotherapy, the nurses and doctors showed support and concern and friends just unconditionally loved me through this,” said Vizcaya who has to now pay for her cancer treatment at the UHS as the insurance approval she has is for an Abu Dhabi hospital only. However, owing to COVID-19 restrictions, she cannot travel to that emirate.

She continued: “I decided to be creative and positive once again in my fight against cancer. I wanted to extend my support to hundreds of cancer patients across the country. I also wanted to mark the UAE National Day. These T-shirts in the UAE national colours are my tribute to this beautiful country where people just adopted me as family. Had it not been for their support, I would not have survived this alone,” said the spirited young woman.

Previous articleGold prices are dropping and could go all the way to $1,660 levels
Next articleExpat threatens to kill worker and damage Dubai restaurant over free meal claim